I have built a water tower for my extraction plant.  It is 34 foot tall.  The tank is made from plastic tank parts.  The base of the tank with the railing on it is a large metal washer.  The hatch on the roof is a reefer part.  The support structure is wood strips and the railing is made from a thin card stock strip. 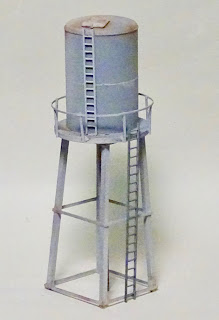 I used a prototype photo (below) for ideas on how to construct this tank though the prototype is way taller than my model. 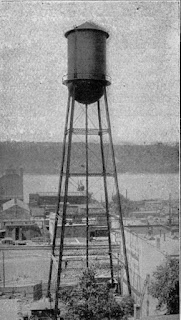 I built a layout extension shelf at the end of my main layout aisle for the extraction plant.  So far most of the extraction plant models are installed on this shelf which adjoins part of my narrow gauge track.   I am now applying scenery to the area.

Posted by Stan Knotts at 1:16 PM No comments: Links to this post

As I do every year I am posting more photos of my Fathers Troll & Elfin model railroad.  He took many photos over the years though the majority were 35 mm slides which is a bit of a problem.  He and I got into model railroading at the same time.  My father modeled more for fun than any prototype. 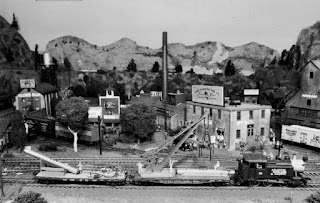 Above is a view of the town of Troll with a train on the tracks. 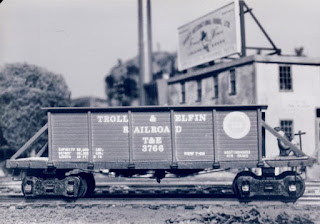 Above is one of his scratch built hopper cars. 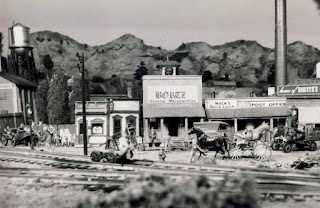 The photo above shows some of his structures, a few of which I now have on my model railroad. 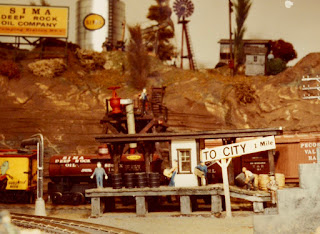 Most of his photos were black & white.  I have this small "station" on my layout also.  My fathers layout was much smaller than mine is but I saved a few structures and most of the details.  The rest I either sold or gave away.  Neither my kids or grand kids have any interest in model railroads so my stuff will be disposed of when I die, thought they will probably save a few pieces.

I got this brass ferry truck model many years ago.  It was mostly assembled and unpainted.  I painted it using my imagination.  When I tried to use the decals that came with it they disintegrated so I used some dry transfers I had and labeled the truck bodies for the Railway Express Agency (REA).  The REA was kind of the early UPS company and it ended in 1975 I think.

The photo above shows the truck bodies sitting beside the car.

Above is the truck bodies sitting on the car.

Above is a photo of a prototype.


Posted by Stan Knotts at 4:50 PM No comments: Links to this post

I spent a lot of time trying to decide how to do this tank and attachments.  The tank itself was easy - it is a hydrocal casting by Yorke that I bought many years ago.  The pump shed was also easy once I decided what to do.  It has a pump inside that I scratch built but it is hard to see.  The trackside "filler' (not sure what it is called) is a commercial casting.  It will be used to fill tank cars with the extract.  It can also fill trucks. 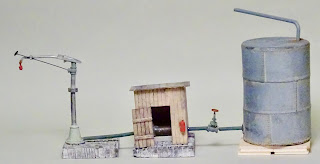 The components are not actually connected at this time but will be once installed on the layout.  The pipe above the tank will go to the extract building to accept the extract.  There is a control valve between the tank and the shed and a fire extinguisher on the shed.  The wood underneath the tank is a temporary means of keeping it level with the pipe on the shed. 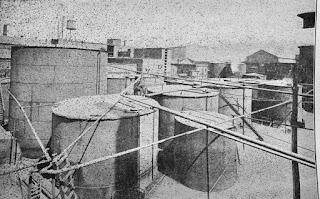 Above is a pre 1920s photo of similar tanks connected by pipes.

Next I will install the components I built for this extract plant on the layout with some scenery.  I may add an additional building.


Posted by Stan Knotts at 8:28 PM No comments: Links to this post

The autoclave shop is complete.  I made the roof removable to allow the detailed machinery inside to be seen.  Since the model will be near the edge of the layout when installed it will be easy to remove the roof and look inside.  The detail at the top front edge is the electrical connection from the power house. 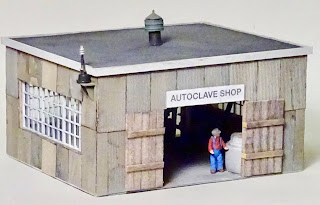 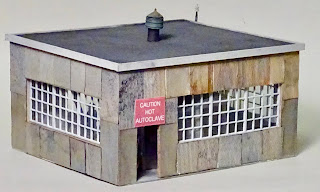 Below are some photos with the roof removed. 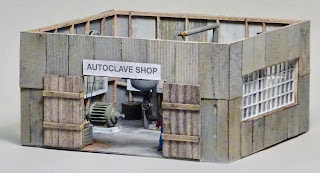 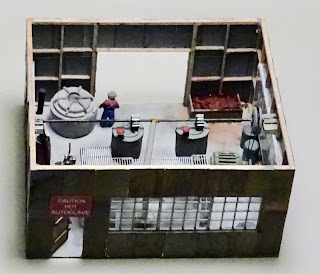 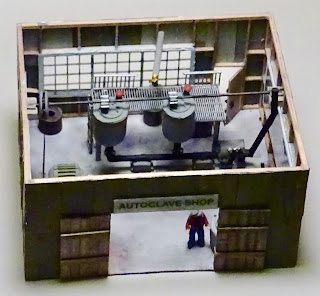 Well that was fun.  The next model will be the extract tank.

Posted by Stan Knotts at 11:46 AM No comments: Links to this post

It has taken me a while to create the autoclave machinery.  The research was time consuming and the construction was tricky.  I never found the information on how the vintage autoclave machinery functioned so I made my own decisions on that.  The basics are that there was an input pipe for the liquid and a drain pipe for resulting extract.  There was also the need to feed the ground bark into the autoclave.  Below is my representation. 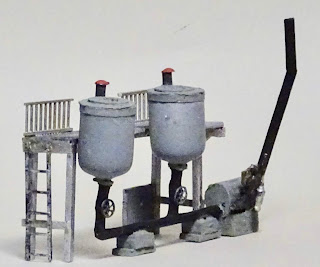 I built two autoclaves with an access platform behind them and a drain pipe with a drain pump.  When I install it there will be a feed pipe that will extend over the platform from the back.  There will also be gears above the autoclaves to turn them.  The bark is fed from above. 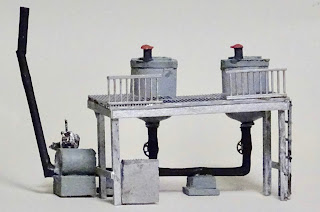 Above is a rear view.  Below are some diagrams of vintage autoclaves. 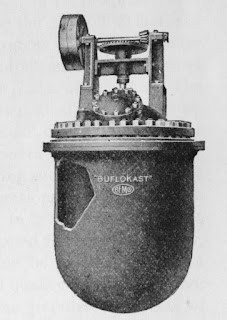 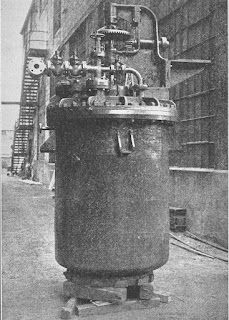 When I researched online I could only find modern or semi modern autoclaves.  The ones I show above are from some of my old industry books.

Posted by Stan Knotts at 7:19 PM No comments: Links to this post

I am part way through construction of the extraction plant autoclave shop.  The autoclave heats the bark shavings in water under pressure to create liquid extract for tanneries.  I have a number of pictures of vintage autoclaves but no pictures of how they are connected so I will use my imagination to create the machinery involved.  Thus far I have constructed most of the building not including the roof. 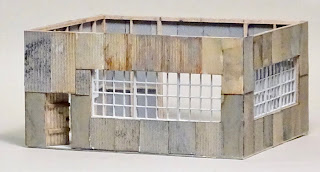 The building consists of an internal wood frame covered with corrugated metal sheets.  I inserted three large industrial windows to hopefully allow the machinery inside to be seen after the roof is installed. 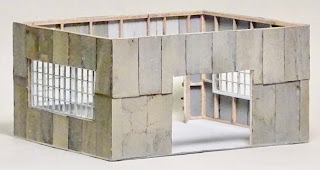 Below is a view of the internal wood frame. 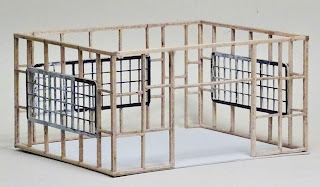 The floor is card stock.

I have partially created the autoclaves and am designing how everything is connected.  Hopefully I am close to what actually existed.


Posted by Stan Knotts at 9:18 PM No comments: Links to this post