This is the steam engine for the tannery.  I made it from a Rio Grande Models Corliss Steam engine kit.  I like the RGM kits - they have great castings and make really nice models.  They do however sometimes have some limitations, which in this case was the foundation for the engine.  The engine needs a foundations as the flywheel extends lower than the engine and the kit does not supply one nor any clue as to how to make one.  Now that is not rocket science but it would be nice to have at least an example.  In any event the engine is now complete and I can thus determine what size to make the engine house. 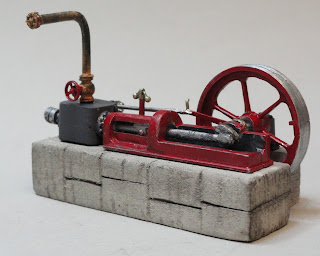 Just having fun!
Posted by Stan Knotts at 10:55 PM No comments:

I have finished the beam house.  It sits behind the wash house structure.  My beam house is built with clapboard siding and a flat roof.  It is well weathered as all parts of the tannery will be.  This is a scratch-build with commercial window castings.  The doors are a mix of commercial castings and scratch.  The building has a masonry foundation built from the same material as the wash house. 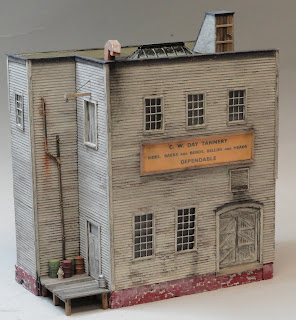 The next structure to be built will be the engine house, which will be to the right of the beam house.
Posted by Stan Knotts at 10:21 PM No comments:

The next tannery structure I am building is called the "beam house", an old term derived from the practice of working the hides for hair removal and other preparation activities over rounded beams.  In later years (not sure when the change occurred) but clearly by the 1940's, the work in the beam house was done by unhairing, fleshing and checking machines.  Since the interior of my beam house will not be visible I do not need to decide what methods would be used in my beam house in my 1939 era but I am assuming a more modern approach such as described below. 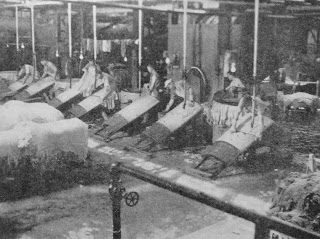 The photo above shows an earlier beam house interior with the hides being worked over rounded "beams".   This process was replaced by a variety of machines.  The fleshing machine has rollers and a sharp spiral knife which revolves at a high rate of speed as the skins are forced and drawn against it by friction.  This way the excess fat and flesh left by the butcher is cleaned off and a clean surface is left for the chemical treatment to follow.  The first chemical treatment is depilation where the hair and epidermis is removed.  For this the skin is placed in a paddle tank containing a lime liquor to which is added some sodium sulphide.  This action can take 3 to 4 days.  This loosens the hair to enable the next step where the skin is unhaired by using a machine similar to the fleshing machine but with a blunt knife.  The next process is a scudding machine that further cleans the skins.  The next process is called "bating" where older processes using dog and chicken manure have been replaced by chemicals such as ammonium chloride or sal ammoniac, and some inert substance such as cornmeal.  This process is accomplished in another paddle tank.  The skins as they emerge from the bate liquor have lost their rubbery texture and now are fairly soft and flaccid.

At this point the skins need to be stabilized and so undergo another paddle process where they are worked in a solution containing sulphuric acid, salt and water.  The next step is the tanning process but that will be covered later.

I will soon post a photo (or two) of my beam house which sits behind the previously completed wash house.  This structure has been a challenge due to my practice of not drawing any plans - thus the in-process changes have been frequent, compounded by incorporating a brick wall on one side for the following structure which will be the engine house (containing a Corliss steam engine to drive the machinery in the tannery).  It is all fun to me.
Posted by Stan Knotts at 4:48 PM No comments:

Here is the hide shed that receives the hides via rail car.  The hides are sitting on pallets and are then transported into the wash building on a push cart. 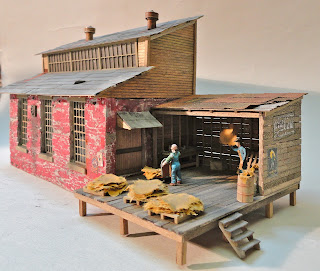 It is somewhat hard to see inside the shed but it contains a workbench on the far wall next to the building, a box, an empty pallet leaning against the back wall, a hide hanging on a hook which the worker on the right is reaching for, and near the right front two barrels with hide scraps.

The shed is made of strip wood with a rusty corrugated metal roof.   The finish on the shed is only alcohol/india ink stain with a dusting of gray chalk on the decking to give a dirty effect.  There are a few signs on the side and the back.  I told my wife I made the piles of hides by skinning a mouse, but she was not buying that.  In fact they were made from a Kleenex that I spray painted on both sides, then tore it into small pieces which I glued into small stacks.  I also used the painted Kleenex to make "leather" aprons for each of the workers.
Posted by Stan Knotts at 5:04 PM 1 comment:

I have decided to make this structure the wash house where the arriving hides are washed and cleaned prior to the scraping and hair removal.  It seems by 1939 that tan bark use had declined so leaching of the tanbark was not necessary.  In any event this is building number one.  I am working on a receiving dock for the hides which will adjoin this structure on the right side. 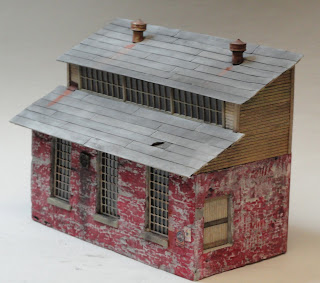 This building is of course reduced in size as I have no room on the layout for a full size tannery which would be quite large.  The beam house will adjoin the rear of the structure so I did not bother detailing the back - it is merely blank card stock.  The front and sides were made from the Downtown Deco plaster rough brick, the windows are commercial castings as are the vents on the roof and the exhaust fan on the front.  The roofing is covered with painted paper strips to represent roll roofing and dirtied with black and gray chalks (with a small tear at one point), with rusty streaks from the vents.  The upper walls are scribed wood.  I prefer weathered structures so that is the way I built this.
Posted by Stan Knotts at 8:11 PM No comments:

I decided to start with the leach house as the first tannery structure.  I had some plaster rough brick wall sections I bought from Downtown deco so I cut up one into 3 walls, and in the front wall I cut three window openings.  I am using three 60 x 120 inch Grandt windows.  The 4th wall in the back will not be visible after all buildings are completed so that wall will have no detail.