I have completed the dredge company model and added scenic detail.   Is anything really complete?  I may add more details later but it is time to move on. 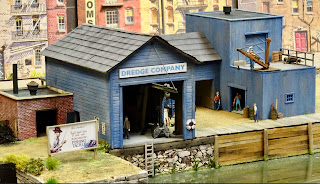 Again I have placed some scene blocks behind the industry.  The fishing gear sign is a commercial 1920's era sign. 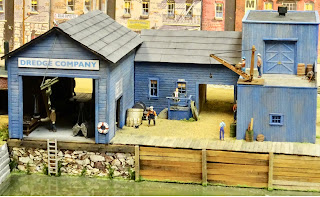 I have added several figures and various details.  While searching through my many figures I decided to do some more sorting.  I separated all of the female figures and put them in a parts drawer of their own.  Due to the types of models I build and my era I do not use many female figures.  I have easily a thousand figures accumulated over the years both by purchase and via estates.  Of these there are at least 100 female figures.  Most of the figures are plastic but some are metal.  I have in the past modified female figures to be male figures but that is tedious.  The figure above holding a sledge hammer has a hammer scratched using a piece of dowel and a piece of wire.

Along with detailing the dredge company, I built a truck from multiple commercial parts and some scratch.  The cast metal truck bed is from an extinct company called Ivers Engineering. The frame is a Walker Models Service product.  The hood section is a part from a Snaparoo kit, the wheels are Sheepscot parts and the cab is scratch built.  This ended up being bigger than I thought it would be. 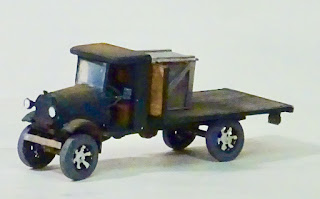 And below is a rear view. 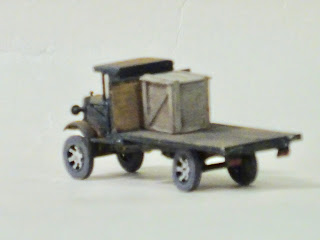 Now I need to decide on my next project.  I need at least one more industry on the dock area and I plan to build a small dredge to sit in front of the dredge company.  Below is a photo of an early 1900's sand dredge which may be my inspiration for my dredge model. 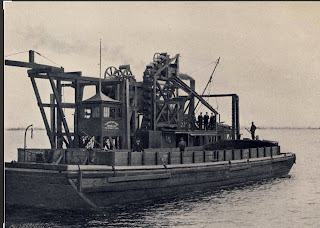 Posted by Stan Knotts at 9:38 PM No comments:

I have completed dredge company building number three.  That completes the dredge company other than scenicing around the structures and in the center yard area.  In the photos you can see some building flats in the background.  They are only there to provide a view block otherwise you would see the unfinished portion of the layout section as a background.  Those building flats are from my fathers layout - I never throw anything away. 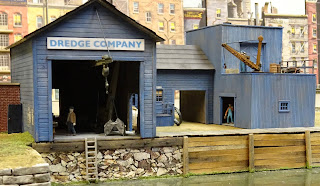 Building three is a flat roof structure with two levels.  I installed a pillar crane on the roof above level one.  That crane consists of parts of an SS Ltd crane that was part of their early tool house kit.  Apparently Sequoia now sells the crane kit.  I bought many SS Ltd kits and details over the years.  Now they only have a subset and some items are now sold by other vendors.  I had intended to put another crane on the roof but it was too big.  The crane is for lifting and lowering material stored on the upper level.  There are stairs in the building (fictional) for personnel to access the upper level. 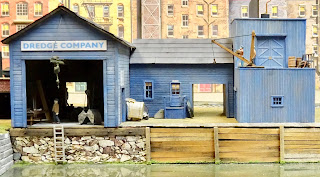 There are a few  details sitting in the yard area.  This will be enhanced. 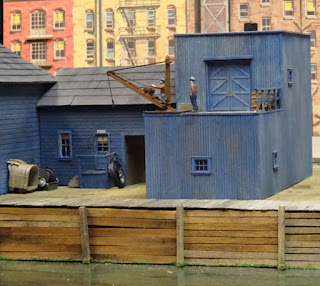 The rear of this structure is not detailed.

I plan to build a small dredge boat to sit in front of the dredge company.

Building number two of the dredge company is complete and sitting on the layout next to building number one.  This was a more simple structure to build.  There is a truck in the tunnel through the building sitting there to demonstrate it's use. 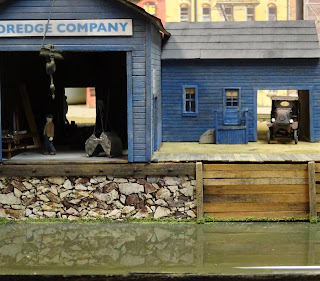 Below is a photo of the rear of building number two. 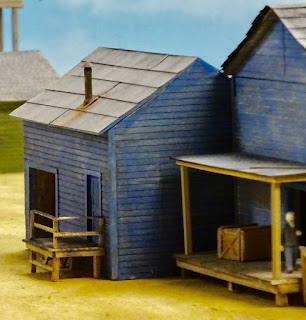 Below is another view of the fish market with some details added. 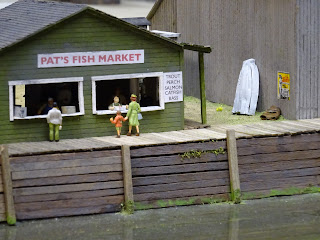 I added some figures at the counter buying fish, and a dilapidated row boat leaning against the boat outfitter building.  The row boat was made with a simple wood frame and paper strips.

Next I will build the third and last structure of the dredge company and detail the interior yard area.

Posted by Stan Knotts at 9:56 PM No comments:

I have completed the dredge company building #1.   It is not yet installed on the layout although one photo below shows it sitting on the layout.  There are two more buildings to be done for this industry. 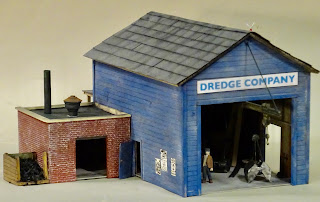 There is a boiler house on the left of the building and a small coal bin beside it.  There is also an engine in the boiler house to power the hoist engine and the lights.   I have added a grab bucket inside the front area of building # 1.  The grab bucket was made from card stock, paper and wire. 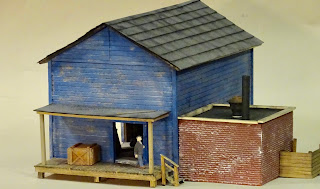 Above is a rear view showing the loading dock. 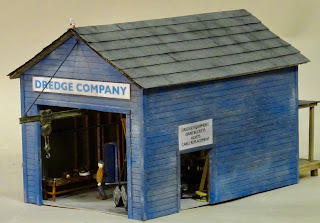 Above shows the right side of the building. 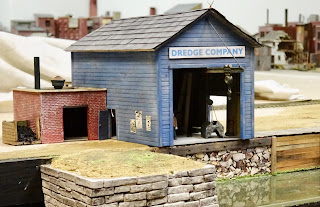 Above you see building # 1 sitting in place on the layout.

Next I will be building the structure that adjoins the right side of building #1.