This dilapidated old barn will be part of a very small farm on a hillside near the railroad tracks.  When the railroad came though they took most of the farmers property so everything is run down.

The foundation is cast plaster, but the rest of the structure is wood stained with my india ink and alcohol mixture.  I first built the inside framing and assembled that on top of the foundation.  Then I applied 1x10 boards with lots of cracks and distressing on the bottom.  I left off a few boards here and there as well as parts of boards.  The roof is framed and again covered with 1x10 stained boards with a few gaps to represent broken roof boards.  I applied Campbell shingles over the roof boards leaving some missing around the roof gaps.  I stained the shingles again with the "inkohol"then dry-brushed them with gray acrylic craft paint, and finished with gray chalk dust. 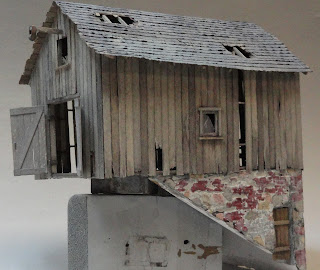 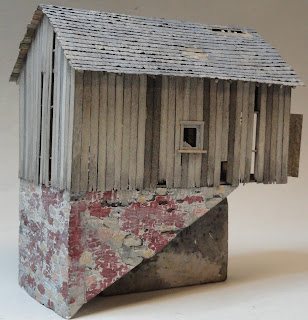 Once the barn is installed on my layout I will add weeds and debris around the base.

As I mentioned before I need to make a water tank for my tannery.  I have been doing some research to see what appeals to me.  The photo below is from a 1930s industrial catalog by a company that made wood tanks for many applications.  the tanks were ordered apparently as kits rather than pre-assembled.  They were delivered by railroad.  Some of the tanks were huge being as much as 50 feet in diameter.  The intended uses ranged over a wide spectrum.  They even supplied wood pipe and flumes.  I am probably going to make my water tower a wood tower based on a design in the book.  This photo is a collage of the types of tanks they supplied.  The original photo was not much better. 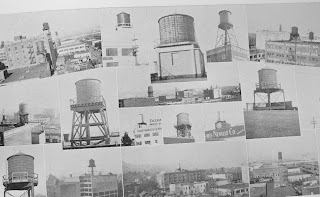 They also supplied water tanks for railroad use including the standard hardware.  Another type of tank they sold were settling tanks.
Posted by Stan Knotts at 11:55 AM No comments:

I have finally finished the boiler house.  That is the last of the structures in the tannery complex.  I have a few exterior details to make such as a water tower and an acid tank then I can permanently affix the tannery buildings to the layout. 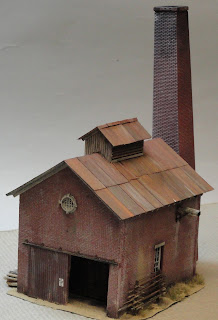 This is the front of the boiler house.  I used CC Crow hydrocal brick castings for the walls.  They are very well done and only 1/8 inch thick so are easy to cut to size and carve in window openings.  All windows are commercial parts from my extensive supply of window parts from multiple sources - do not know the maker of any of them that I used here.  To the right of the front door on the side wall is a pipe and metal rack.  I added a small section of cardstock to the base extending out from the walls so I could add details before I placed the structure on the layout.  That will be blended in after installation.  The grass around the sides is Silflor tufts - great stuff.  I then added real dirt. 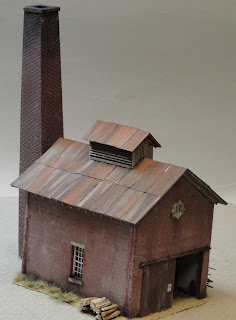 On the left side of the boiler house is a stack of cord wood made from the birdseed detritus I described some time ago.  The boiler is wood fired.  I will add a more substantial wood pile after the structure is installed.  The stack at the back is a commercial part that I modified by adding a trim at the top. 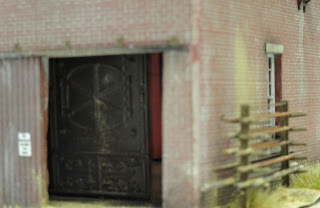 As you can see by this close-up, there is actually a boiler inside the building.  It is a commercial kit I built so long ago I no longer remember who manufactured it.  Unfortunately most of the detail is hidden but at least you can see the front of the boiler.  The structure will be less than a foot from the edge of the layout so it will be viewable.
Posted by Stan Knotts at 8:46 PM No comments:

Below is a vintage photo showing a horse and wagon team delivering the boiler to the tannery boiler house under construction. 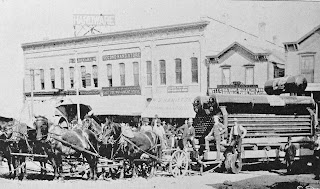 My tannery boiler house is still under construction, and after two in-progress redesigns is moving ahead.  I never draw plans for these structures so the construction process is fluid.  At least I don't waste time redrawing plans.  I expect to complete the boiler house by late next week.
Posted by Stan Knotts at 7:06 PM No comments:

I have now completed the tanning building which is the last building of the main complex.  This building has a very different look from the others in the complex.  It is a wood structure using board and batten siding, with a shed to the side made with plain vertical wood siding.  The main structure has a rolled tarpaper roof while the shed has a corrugated metal roof. 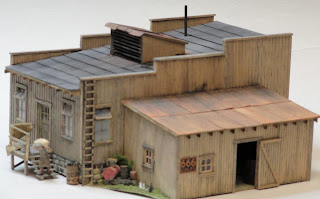 There is a large wooden roof vent on the main building.  The shed has a simplistic interior consisting of round, open-top metal vats containing chemicals for the tanning process.  A figure of a worker can be seen through the open door.  This figure is a modified plastic figure, perhaps a Plasticville figure though I do not recall.  It was a female figure in a dress, which I modified by trimming away parts of the dress, cutting off the long hair and adding a mans hat.  The remaining dress was painted to represent a leather apron typical of what the tannery workers of those days wore.  There is another figure walking down the steps of the main building carrying a heavy bag on his shoulders.  I added a small bit of scenery at the indented corner of the two buildings so I could attach some miscellaneous junk.

The two sides you cannot see are mostly undecorated except for the edges near the two visible sides as those portions will be hidden be the adjoining buildings - the engine house to the left and the finishing building to the right.

The next structure to be built is the boiler house which will not be attached to the main complex. It will have a large boiler inside which will be visible through open doors with a steam pipe that will lead to the engine house.
Posted by Stan Knotts at 4:55 PM No comments:

Leather tanning for my tannery

The equipment and scenes shown here are appropriate for my 1939 era tannery.  While more advanced than the early days of tanning,  processes in this era were still labor intensive employing somewhat crude equipment compared with modern tanning machinery.  Below is an illustration of a wooden horse for piling wet leather stock. 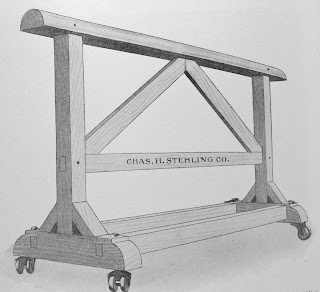 Sulfur Dioxide was commonly used in the tanning process in place of sugars previously used, as it simplified the making of tanning liquors producing more even properties from batch to batch and resulting in plumper and fuller leather.  The sulfur dioxide was typically stored in a steel tank by the tannery rail siding with compressed air being used to feed the chemical into the tannery.  Another means of supplying sulfur dioxide to the tannery was by using one-ton metal drums delivered by a railcar such as shown below.

A more complex machine used was a whole-hide splitting machine such as illustrated below.

Tanneries were not known for their neatness and were often quite messy inside.  Below is a picture of stacks of tanned calfskins in a dry loft awaiting selection for coloring. 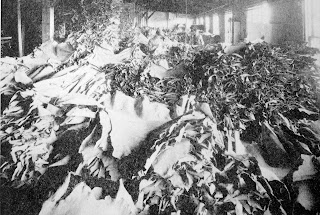 I am about half way through constructing my tanning building for the tannery.  I could be posting a photo of this in the next week.

Hope everyone has a great new year.
Posted by Stan Knotts at 10:29 PM 1 comment: