I have a swamp at an outside corner of my layout.  The swamp is fed by a stream that comes from a far part of the layout and spills out onto the floor (it ends at the edge of the layout).  There is a narrow gauge trestle that crosses the swamp on the way up to the logging area on the mountain. 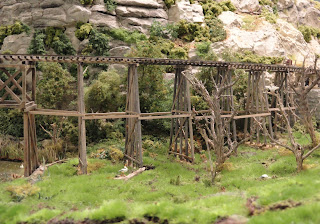 The green grass in the swamp area was made from a product called "pot topper" that I bought in Michaels craft store.  It is designed to place on top of plant pots as a decorative covering.  These toppers are cheap but they have a base underneath that needs to be removed so that the "grass" will nestle down on the layout, and that base is a pain to separate from the grass part.  The toppers are round and about 6" in diameter so I needed several to cover the swamp area.  There are natural segments in the grass part so it looks like dirt patches among the grasses.  I added a few sagebrush trees to simulate dead trees, and added a few "dead logs" among the grass.  There are a number of waterfowl and other birds in the swamp area, as well as an owl, snakes, frogs, etc.  The small critters area really hard to see unless you look closely. 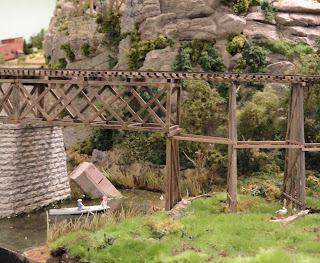 In the photo above you can see the steam that runs though the swamp.  There is a decaying narrow gauge boxcar that fell off the trestle long ago and projects up above the water.  In front of the boxcar is a rowboat with a young man rowing his sweetheart along the stream.  The stream comes into the swamp area from beyond the stone pier on the left. 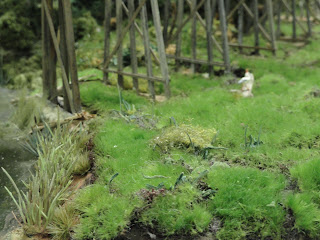 Above is a shot looking down at the swamp area showing the separations between the grass.

I also installed swamp sounds made by Fantasonics which I have installed on a Dream Player which is a solid state device with various options for playing sounds.  Up until this sound installation I had been installing cheap CD players to play other Fantasonics sounds.  In addition to the Dream Player I have a power supply designed and built by my late friend Gordon North which will support up to 5 Dream Players and, on a separate side, a supply to handle structure lighting on the layout. 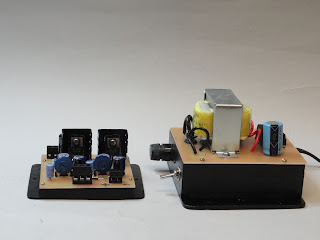 Above on the right is the power supply and on the left is an amplifier for the speakers since I was using unpowered speakers.  The speakers are ported out the fascia under the swamp area with one on each side of the layout corner and about 8" from the corner.  That way when you stand at the corner you hear  a stereo swamp sound - really neat.

The water in the stream was made with Envirotex two part epoxy resin which I prefer to the other products I have tried, including Magic Water and the Woodland Scenics product.  I poured the stream several years ago and it is doing fine except I managed to mess it up a little while working on the swamp so I will be refreshing it next year.
Posted by Stan Knotts at 2:53 PM No comments:

I have had this locomotive drawing and plans for many years with the thought I would build one,  but that now seems unlikely so I thought I would share them in the event someone else might like to build some form of this inspection locomotive.  The loco was built by the Schenectady Locomotive Works for the Delaware & Hudson Canal Company for the use of the superintendent.  The length between the points of the two pilots was 41 foot 5 inches - really small.  It traveled at 45 miles per hour with bursts up to 60 miles per hour.  It had an abundance of windows to provide an unobstructed view of the track.   The passenger area was fitted with a toilet closet, a writing desk, 3 drawing room car seats, and a sofa lounge which could be made into a bed. 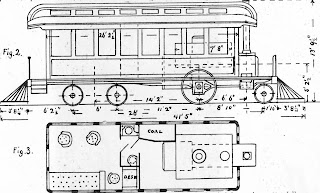 The name on the side of the loco is "Transit" and the number is 300.   A neat little loco.

New structure on my layout

I have installed on the layout the new structure that I recently built.  It is located on the edge of a small town called Elder.  It fit in a once vacant lot.  The town has one paved street - kind of difficult to have many large towns on a 17' x 25' layout and still have industrial areas.  As with most of my structures on the layout it is held in place only by the scenic cement around the base, and can be fairly easily removed if needed.  I added various detritus around the building to make it appear used and somewhat run down. 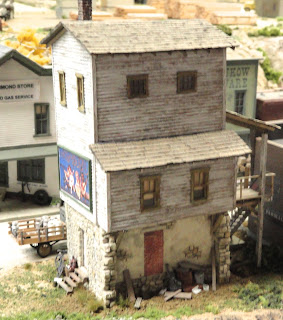 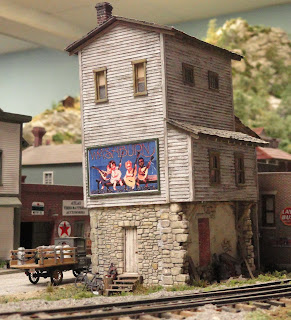 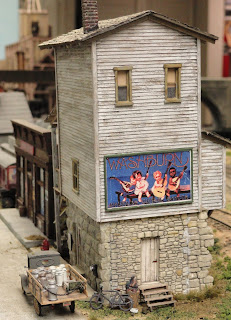 I may at a later time add one or more signs to the building indicating what it is, but for now it is unspecified.

Due to the holidays I will likely be slow in additional postings although I have pretty much decided on what I will build next.  There are a number of scenery improvements that I have planned so that will al;so figure in to the schedule.

In any event have happy holidays whatever you celebrate.

Below is a photo of a 1912 vintage crushed stone plant.  It is from a 1912 industrial book and I have no idea where it was located but I just thought it was interesting.  If I had a place for it on my railroad I would build a model.  I think it is interesting that the truck being loaded barely fits under the bin.  I am guessing this facility was originally built to load wagons. 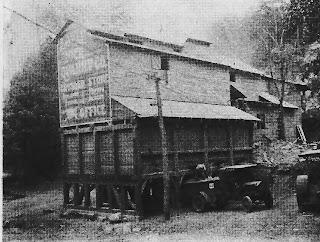 I am sorry the photo is not better quality, but it was a small photo and not that great to begin with.  It does however convey the idea.

Finished model structure yet to be named

I have finished the structure I started a few weeks ago but still have not decided what it is, and to make matters worse I have decided it will not fit in the layout location that I previously planned.  So I have selected another location in a small town that is near the tannery I previously built.  The result of this was the rear of the building could now be seen from around the corner of the layout, and I had not but any doors or windows in the rear thinking it wold not be seen.  Since the basic building was complete I had to modify it to add one wind and one door.  Not a fun task.  Here are a few photos of the structure. 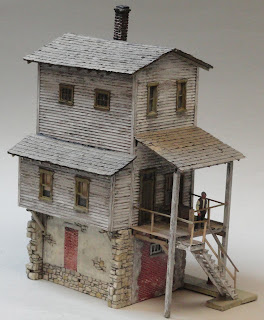 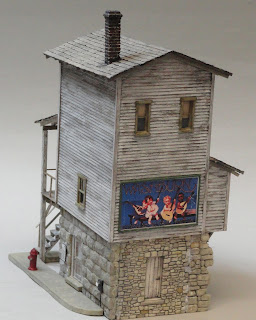 After I have installed this on the layout with details (and hopefully a name/purpose) I will post it here.  I wonder what is going on in this building?

My good friend Gordon North passed away this last weekend at the age of 81.  Gordon was an outstanding modeler and one of the first to model in On30 (or as Gordon preferred to call it - On2 1/2). His model railroad was called the Denver & Western and was featured in several magazines, most often in the Narrow Gauge & Short Line Gazette.  He developed an advanced version of the once popular PFM sound, and called his version North Sound.  His model railroad used this system to the end. 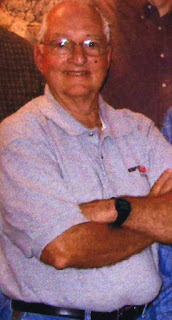 Gordon was well known in the narrow gauge community and always willing to help other modelers.  He scratch built almost everything on his railroad including structures, engines and rolling stock.  Gordon never bought kits - just parts.

We will miss you Gordon, rest in peace.

Some years ago a bought several boxes of Aurora cheap plastic vehicle kits called Snap-a-roos.  They were originally marketed as cereal box prizes (long before I learned of them) and they were intended for kids.  The name came from the fact they were just designed to snap together - no glue.  They came four kits to a box.   I have forgotten where I got them and only have one box and some parts left.  There were several versions with different components, mostly about HO scale but some were smaller scales (in the same box), after all - kids are usually not worried about scale.  Over the last years I have assembled some of these into credible vintage models, and used some in my junk yard.  Below is a small soft top car I just completed.  As you can see from the untouched kit (red parts) I painted my model and glued it together.  I also added some details but not much.

You can sometimes find these on Ebay.  They were originally maybe a dollar or two per box but they now sell for more.  If you can find them cheap they make decent and easy to build vehicles.

I have started constructing an old building that has been converted into a business.  I have not yet decided what that business will be.  I started with some left over Yorke hydrocal castings that are the parts of the base that you see.  I have added a partially completed wood structure on top.  This building will go on my layout in a slight depression on the outskirts of my city.  The city will be to the right of this structure.  There is no rail siding but the mainline runs in front of it. 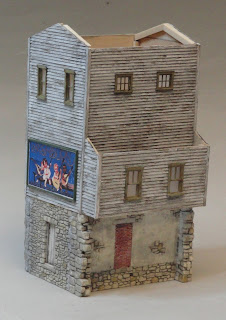 The windows are a mix of SS Ltd cast metal and Tichy plastic windows.  Since I made no plan and am making this up as I go I have only a vague idea of what I will do with the rest of the building.  I guess I will be surprised - hopefully in a good way.

As usual I have painted it to represent peeling paint over an alcohol/ink base color.  The sign is something from my scrap box of sign material and has no bearing on the use of the building.