Their first attempt at a metal flat used an iron tube frame which apparently was not up to heavy weights.  This car used steel tubular frame that was more successful.  The photo shows it hauling 147 car wheels weighing 80,000 pounds.  The steel tubes were bolted together and used "gas pipes" between the steel tubes.  The car was 34 foot long.  This was an experimental car.

This would make a neat model.

Back on September 6th I posted an image of a Fairbanks-Morse ballast loader vintage 1908.  Here are two similar machines from a 1906 Jeffrey Elevator & Conveyor catalog.  These machines are fascinating and as crude as they appear, they were better than hand loading which had been the standard. 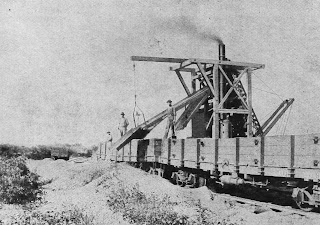 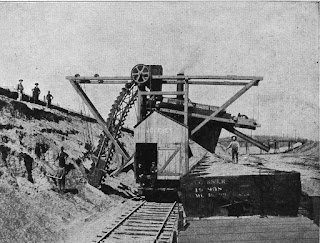 These seem to be different machines though they could be just modifications of the same design.

I am still thinking about my next model build, although I just finished constructing a top superstructure for a  railroad bridge that has been on  the layout for over a year with only the bridge "floor" and track in place.

Posted by Stan Knotts at 7:52 PM No comments:

The barrel factory is finished and installed on the layout.  I will probably do some more detailing around the factory but essentially it is done.  This has been an interesting project.

The barrel making process is interesting.  The green wood (bolt) is delivered to the factory by rail and dried in the area behind the factory (real small on my model).  When reasonably dry it is run through the drying shed on a rail trolley.  It then enters the factory where the wood is split and cut into staves.  Heading pieces are also cut and when the barrel is assembled, a groove called a "crozing" is cut into each end of the staves to allow the heading to nestle tightly into it.  The barrel is then formed and hoops of wood (or more recently metal) are fastened around the barrel to make it tight.  This is a very abbreviated version of the process but gives you the idea.

Below are photos of the barrel factory on my layout. 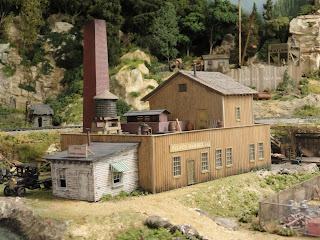 The industry is located at an inside corner of the layout thus the rear and right side are not viewable.  You can see a truck at the left.  I added a truck loading door on the side of the factory behind the office.  You can also see the boiler house stack behind the small water tank on the factory roof. 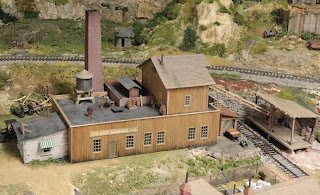 This view is as good as it gets for viewing the barrel conveyor and the trackside platform on the right where the barrels are loaded on a rail car.  I added some wood scrap behind the factory which can be seen just beyond the office.  I also placed a variety of vents and details on the factory roof for visual interest.  With most of our model structures the most prominent feature we see is the roof.

Most of the effort on this barrel conveyor was the research and design.  When you buy a kit to build, all of that has been done for you to the best of the ability of the manufacturer.  Then if they provide good instructions (not always the case) you just have to follow the instructions to build your model.  When scratch building models such as this you are on your own with whatever prototype information you can find as well as some reasonable understanding of how machinery works.  This conveyor model is based on information from a vintage engineering catalog.  I posted photos several weeks ago of barrel conveyors and I used those photos as my guide and inspiration. 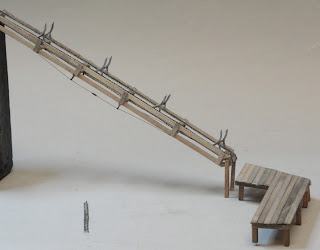 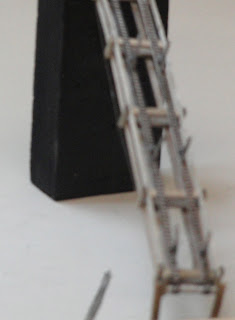 The conveyor is made from strip wood stained with my usual india ink and alcohol mixture.  I made the chain tracks from a single strand of plastic window screen.  The curved barrel supports on the tracks were made from cast metal passenger car roof beading for older style passenger cars.  Unfortunately the second photo is not very clear.  There is a short piece of the screen strip used for the chain tracks lying next to the conveyor.  At least one model manufacturer makes a sprocket chain which they market for loco mechanisms but the cost is quite high.

I added a third photo above to show the sprocket chain (made from screen wire) better.  I also added a barrel being held by the curved supports.

I did not model the gears and machinery at the upper end of the conveyor as that is inside the upper factory door and cannot be seen from the layout aisle.  I used to model details that can not be seen but have given up doing that.  Some of my structures do not have any detail on the side that cannot be seen.

My next work on the barrel factory will be to install it on the layout and detail the surroundings.

Posted by Stan Knotts at 9:14 PM No comments:

This is the office for the barrel company.  It attaches to the left side of the barrel factory.  It is heavily weathered and has not seen paint for many years.  The awning covers the window that gets the most sun. 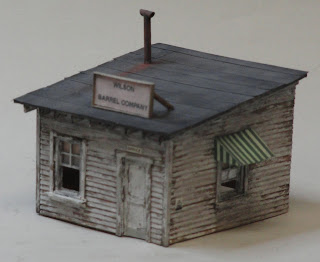 The construction is clapboard siding to contrast with the rougher board and batten of the factory.  The roofing is tar paper as the slope of the roof is too slight to use shingles.

Next I will build the barrel conveyor that moves the barrels from the second floor storage area to the outside loading dock.  I showed examples of these conveyors in an earlier post.