It has been a while since I last posted.  This model took longer than expected plus we had some health problems at home, but all is well now.  I suspect many of you have never heard of Gutta Percha.  It is a material obtained from Gutta Percha trees found in Southeast Asia, Northern Australia and other locales in that area.  It was used from the late 1800's through the 1930's to create a plastic type of material but was supplanted when petroleum based plastics hit the market.  Some examples of where Gutta Percha was used was for a covering on the first trans-atlantic telegraph cable, and for many household and decorative products.  One of the few uses now is in dental work.

My model is a combination of kitbash and scratch build.  It consists of 3 buildings - the large building uses the walls and windows from a cheap plastic kit (I do not recall what kit as I saved those portions and discarded the rest long ago). The center connecting section is scratch built from wood.  The third section with the deteriorating stucco is based on 3 walls of what I think was a military model of which I only had the three walls and roof. 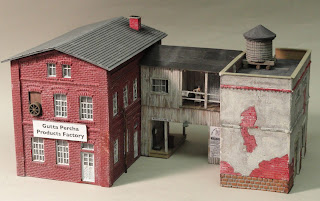 I modified the large building by adding an entrance shed on the left side, a large exhaust fan in one front window, an exterior plumbing pipe on the right side, a roof made using Tichy slate roof shingles, and a chimney of unknown origin.  The signs were made using computer presentation software. 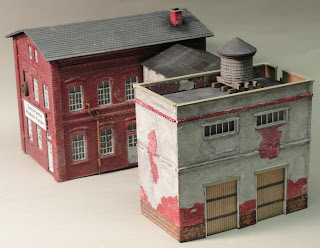 The building on the right was made higher with a stone wall base as it was strangely short.  I added a small water tank on the roof and a ladder at the back.  I think of this as a garage for the facility as it is not a rail served industry. 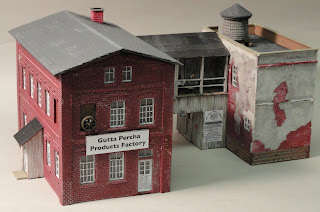 The center section is primarily a connector between the two buildings.  I added a porch/balcony on the second floor for visual interest.  On that porch I have a figure at the railing, a chair, a box and a broom.   The lower part has a drive-through with a loading platform for the main building and doors on each side. 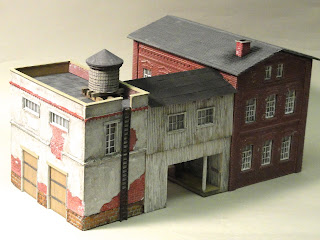 The rear of the complex is somewhat plain as it will face away from the edge of the layout (when I figure out where I can put it).  This thing just grew from a germ of an idea - or two, and the kit pieces in my scrap box.

This was an interesting project, including my research on what Gutta Percha was.  If you want more info on that just do an Internet search.  The structure itself could be anything.  I may add more details when I install it on the layout.